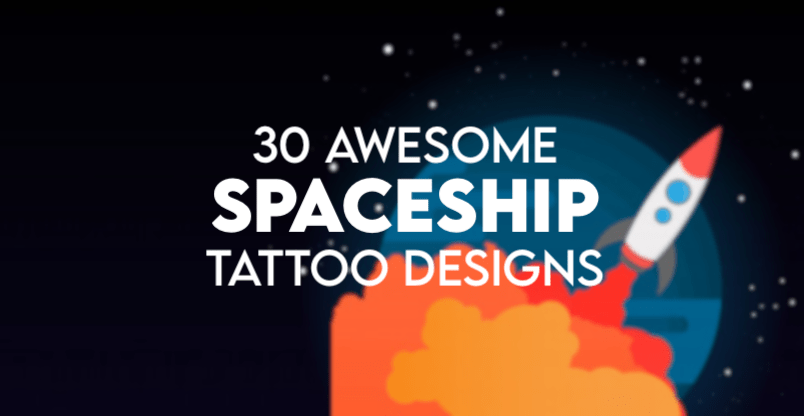 What life forms exist outside of the Earth’s atmosphere?

As of late, no one can tell just yet. But, there are many theories. It is no doubt then that many people have developed a fascination with space.

Celebrate your fascination (or obsession) with an adorable tattoo of a spaceship. I have compiled 30 of the most awesome spaceship tattoos.

Each artist is given due credit, so if you want to check out more of their work or message them directly, their names and Instagram accounts are all there.

Towards the end, I’ll also answer some FAQs and talk about some fascinating stuff related to space. So keep reading!

Alien lifeforms and space have captured the imagination of many curious individuals. They have become fascinating subjects in pop culture.

This explains why a cartoon-ish style of spaceship tattoos are slowly becoming more and more popular.

The cartoon style space ship tattoo attracts the eye very quickly. And, their effects can vary – from cool to super adorable.

It will all depend on the design that you choose for your spaceship tattoo.

Another super adorable style for spaceship tattoos is in the minimalist style. Also known as black-line tattoos.

These tattoos are devoid of vibrancy, but they do not lack in style.

Having a tattoo like this one on either the arms or legs will surely get other space enthusiasts’ heads turning.

These tattoos are great for those who are thinking about getting their first tattoos.

These tattoos will – for, sure – get the attention of die-hard space fans! Spaceship tattoos like these rely on great linework and perspective.

Getting a tattoo artist that specializes in those two things will guarantee astounding results for your spaceship tattoo.

There is just something very satisfying about symmetry. This is also one reason why geometric style tattoos (and geometric aesthetics in general) have gained traction over the past decade.

In spaceship tattoos, the geometric shape contains the tattoo. The narrative remains within the spaces of that shape.

Sometimes, to add a bit of flair, elements of the tattoo spills out over the edges.

Regardless of what design you choose for your spaceship tattoo, these tattoos look the most stylish.

Popularized in many science-fiction movies, alien abduction is another popular narrative in spaceship tattoos.

They are probably the kinds of tattoos in this category that allow the most creativity.

They can range from straightforward human figures lifting off the ground to something more bizarre, such as a crying dog peering out the window as it journeys to space.

Why are people so obsessed with space?

Some even claim that these governments are in constant communication with extraterrestrial life forms.

The Internet is scattered with these theories. In the sections below, I will be discussing how these theories emerged throughout the centuries.

A series of documents known as the Majestic 12 surfaced in 1982. These documents were said to contain information proving top-secret and high-level U.S. government interest in the matter.

The documents dated back to the 1940s.

She was an advocate of theories that claimed cattle mutilations are of extra-terrestrial origin. She also believed in the speculations that the U.S. governments were involved in aliens.

Second is Bob Lazar – who created a reputation for himself as a TV personality. He appeared in a special interview with George Knapp, who was an investigative reporter at the time.

During the interview, Lazar claimed that upon closer inspection and access to confidential documents, he came to the conclusion that UFOs existed.

A UFO reportedly crashed into Southaven Park in New York on November 24, 1992. The crash site was investigated by John Ford, who was later arrested on suspicion of attempting to poison several politicians.

His arrest, and the charges filed against him, are believed by some to be a frame-up.

In the mid-1990s, the Branton Files were circulating on the Internet. The content of the documents was about the UFO that had crashed in Southaven Park.

The fanaticism over UFOs and extra-terrestrial life continues well into the 2000s.

The files contained correspondences between government officials – including Margaret Thatcher.

The documents contained information about unidentified flying crafts that flew over Liverpool and Waterloo Bridge in London.

In 2013, a production company held an event called “Citizen Hearing on Disclosure” at the National Press Club in Washington.

The event organizers paid Mike Gravel and other representatives $20,000 each to participate, and to preside over groups of academics and government and military officials in discussing extra-terrestrial life and UFOs.

Why should you get a spaceship tattoo?

Spaceship tattoos are fun and quirky pieces. From the sections above, they don’t look as badass as some of the other tattoo themes that have been discussed on this website.

However, they do have a unique attractiveness. They are great conversation pieces. Anyone who sees your spaceship tattoo will feel the need to ask why you got one in the first place.

They are a great addition to your repertoire of body art, especially if you have a fascination of space, extra-terrestrial life, and UFOs.

What style should my spaceship tattoo be in?

The spaceship tattoo doesn’t always call for large, grand, and intricate designs. Some of the examples from the sections above show single-colored minimalist style designs.

Depending on your desired aesthetic, you can also go for the more intricate and colorful cartoon-style spaceship tattoos.

It really just boils down to whether you prefer having that extra splash of color and narrative.

Where should I place my spaceship tattoo?

Spaceship tattoos are the kinds of tattoos that you want to be seen. People typically place them in locations that are highly visible such as the arms or the legs.

The placement will ultimately depend on your pain tolerance. If you can handle the pain, the wrists or the ankles are great spots for them.

Pain intensity varies wildly between each person. What might hurt for you might not hurt at all for someone else.

So before you get your tattoo, go over the following points.

Size & complexity of the design

A significant factor that dictates how bad your tattoo will hurt is how big and complex the details are.

The reason for this is because bigger and more elaborate tattoos take much longer to finish. If you have particularly significant and intricate design, it could take several sessions to complete, meaning more pain.

Now when you get a tattoo, your body will be in constant pain. The tattoo machine repeatedly pierces and injects ink into your skin, and you will feel a slightly painful scratching sensation. This is normal.

The body adjusts to this pain by releasing adrenaline and endorphins. You’ll feel the pain start to numb out during this rush, and you’ll feel much less stressed.

The thing is, the rush only lasts about 30 minutes.

Spaceship tattoos are usually small. Or, relatively simple. In this case, you may not outlast the rush, and the pain will be bearable. However, other factors will affect the amount of pain you will experience.

Just remember to get a design that’s appropriate for your tolerance for pain. Too much pain can get in the way of both you and your artist.

Another factor that affects the intensity of pain you’ll experience is where you’ll place your tattoo.

People usually choose to have their spaceship tattoos on places where they are highly visible such as the arms and legs.

These areas have enough muscle or tissue to cushion the needle. So these areas are not that painful.

However, if you decide to place them on the wrists or ankles, these areas may be more painful than the arms or the legs.

If you’ve got a low pain tolerance, then you might have to ask the tattoo artist to take it easy on those areas.

For a comprehensive discussion on which body parts hurt most when getting tattooed, check out this article by Healthline on tattoo pain.

Some people have naturally low pain tolerances. This could be caused by a skin condition, thin skin, or recent emotional trauma. Pain tolerances vary from person to person, so it’s a good idea to figure out how well you fare before booking an appointment.

But if you’re already committed to getting your tattoo, here are a few actionable ways to mitigate the pain:

According to research, a person’s pain tolerance is directly affected by their experience with tattoos. This means that if you’ve had tattoos done in the past, you’ll likely feel less pain.

Though the spaceship tattoo is a rather simplistic kind of tattoo, they should still be part of your tattoo bucket list.

They are tattoos that are simple – but are representative of a unique niche.

Not many people can appreciate the idea of life outside of space, or have the desire to hopefully make it to Mars one day.

If you are one of those people, then spaceship tattoos are a must for you!

Did you enjoy these spaceship tattoo designs, or are you looking for more inspiration? Check out the following links to see more designs from talented artists.

How to Design Your Own Tattoos: 5 Simple Steps

Popular
Recent
Tattoo Aftercare – How To Take Care of a Tattoo 0 comments
Tattoo Apprenticeship – How to Become a Tattoo Artist 0 comments
Tattoo History: From Caveman to Modern Society 0 comments
Kuro Sumi Tattoo Ink Review 0 comments
How Long Do Finger Tattoos Last? September 18, 2020
20 Badass Fenrir Tattoo Design Ideas September 16, 2020
What is a Henna Tattoo: Ultimate Guide in 2020 September 14, 2020
How to Design Your Own Tattoos: 5 Simple Steps September 7, 2020
Earnings Disclaimer: When you buy certain products from some of the sites which we link to, Tattoo Like the Pros receives a commission.