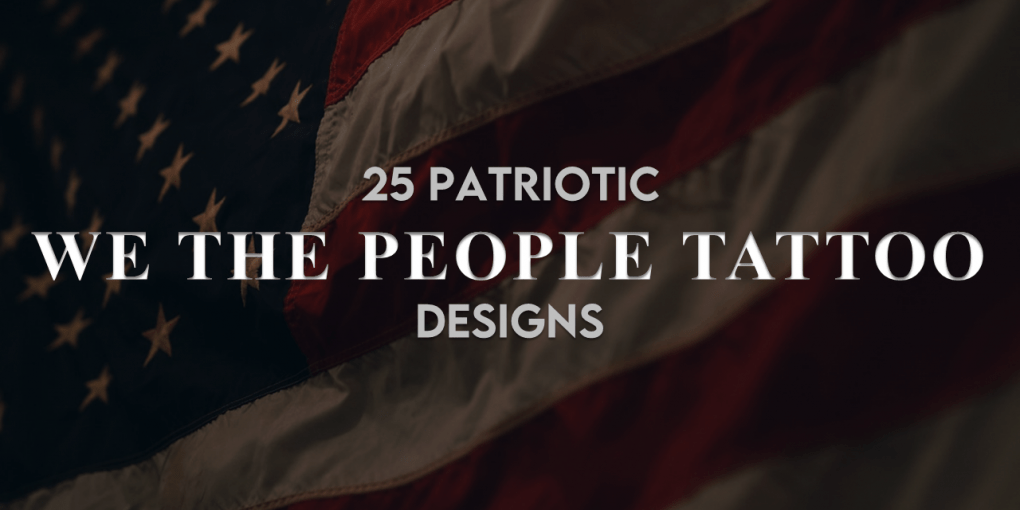 If you’re an American patriot, I don’t think there’s a better way to display your love and support for the land of liberty & love—than a “We the People” tattoo. It’s a simple way to honor our forefathers who fought for the title that America is most known for—the Land of the Free.

And despite the simplicity and length (or lack thereof) of the phrase “We the People”, it’s one of the most powerful patriotic statements out there.

And how it came to be is an interesting story.

In this article, I’ve compiled 25 of the most creative, interesting, and detailed “We the People” tattoos there are. Feel free to check them out!

If you’re alright with a text tattoo rather than a more illustrative or metaphoric one, then there’s honestly little else that can compete with a “We the People” tattoo in terms of patriotism. 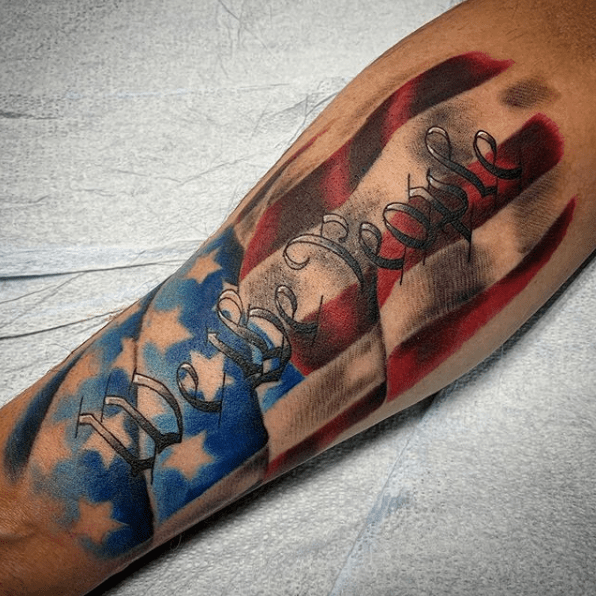 We the People written in front of a vivid blue, white, and red, by Sam Corser (@2ndstreettattoo on Instagram).

And if you’re a patriot yourself, perhaps you should consider mixing in other patriotic symbols to personalize your design. If you look at some of the designs in this collection, you’ll see how different elements are used in harmony with each other. Seldom are these elements used on their own because they complement each other so well. 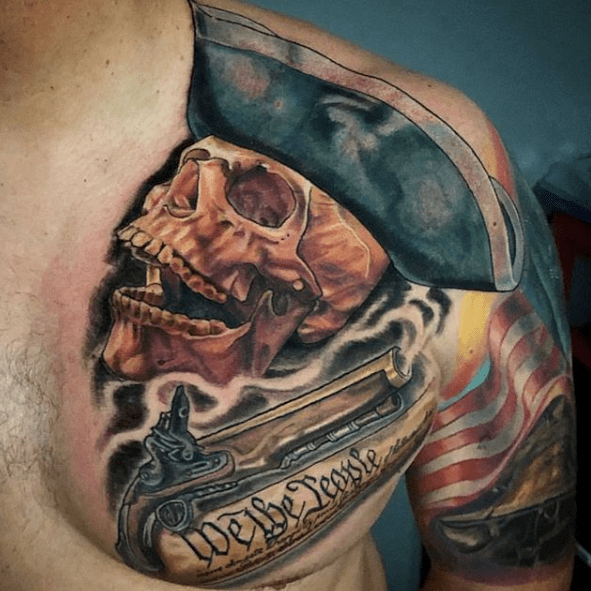 A brilliant illustration featuring the skull of an American revolutionary war soldier wearing a black tricorn hat next to a vintage flintlock pistol, by John Black (@johnblacktat2 on Instagram).

You’ll notice that a lot of the pieces you’re going to see here are located on the forearm. And it’s probably the best spot to put a design like this. Since it’s usually oriented horizontally, the length of the forearm makes for an appropriate canvas to place the design on. It’s easily seen, and the risk of distortion (because of weight change) is minimal. Apart from the base design, the forearm also provides enough space to incorporate other complementing elements. 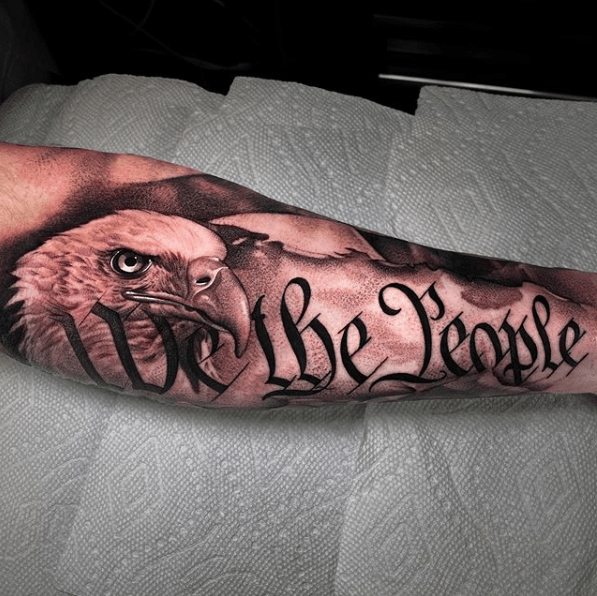 A very detailed We the People tattoo in black and grey featuring a fierce-eyed bald eagle, by Ryan Mullins (@ryanmullinsart on Instagram).

But the forearm isn’t the only place you can put this design. The great thing about it is that you can pretty much put it anywhere. You can stretch it out and place it on your chest, or you can opt to shrink it down so you can place it on your wrist or ankle. The freedom (pun not intended) that a design like this gives you in terms of placement is amazing. And the history associated with it ensures that its meaning is never lost. 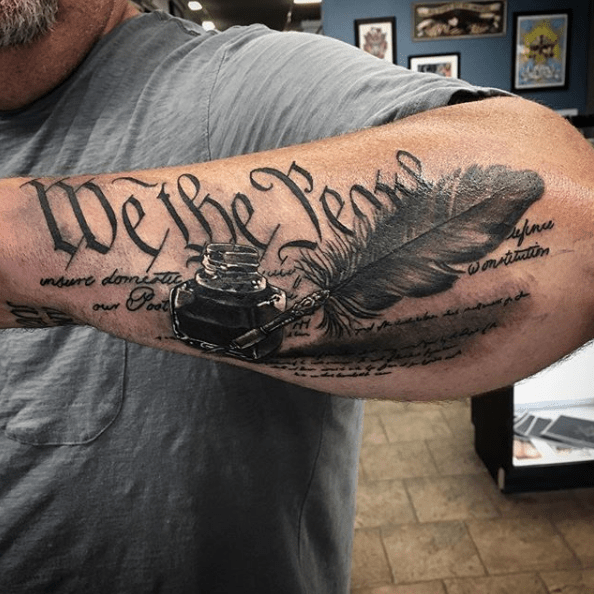 Quill and ink, by Al Ferrante (@legion1978 on Instagram).

Cliché symbols, like the stars and stripes, bald eagle, and liberty bell, are used to complement the “We the People” image, which is oftentimes the focal point of most pieces. And when used in conjunction with each other, the combination of these elements makes for a pretty amazing effect. And by playing with different symbols and placements, you can make a tattoo that is unique only to you. 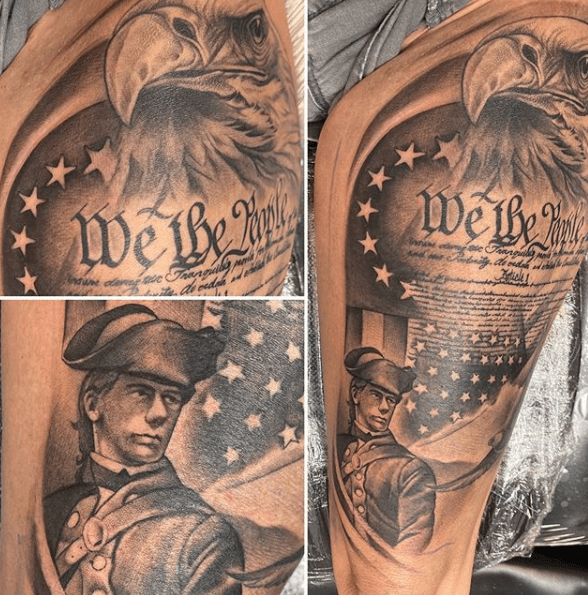 Featuring a proud minuteman who fought for our freedom, by Cody Young (@codyyoungtattooer on Instagram).

But why exactly are these designs built around “We the People” and not the other way around? What makes these three words so important to the American people? 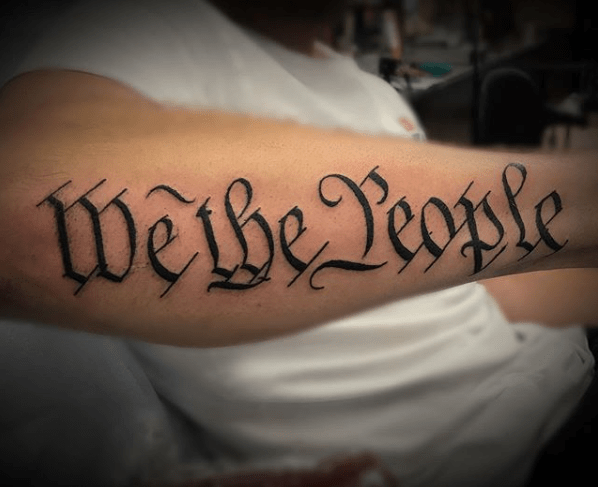 The first three words of the Preamble to the US Constitution, in the original font, simple but effective, by Brian C. (@btatu on Instagram).

We the People: A Short History Lesson

If we’re going to answer these questions, we’re going to have to take a step back and review some of America’s history, particularly during the revolutionary war. 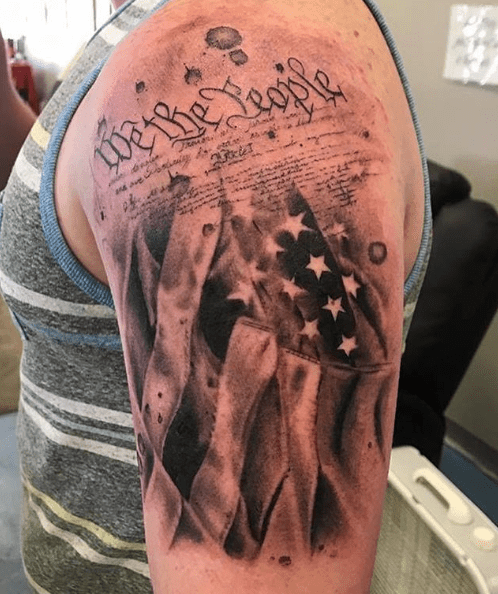 In original font, on the upper arm, featuring the stars and stripes, by Matthew Jackson (@mattjacksontattoos on Instagram).

After a long 13 years of blood, sweat, and tears, brought on by almost two centuries of hostility and oppression, the US Constitution had finally been ratified on the fateful day of June 21, 1788. 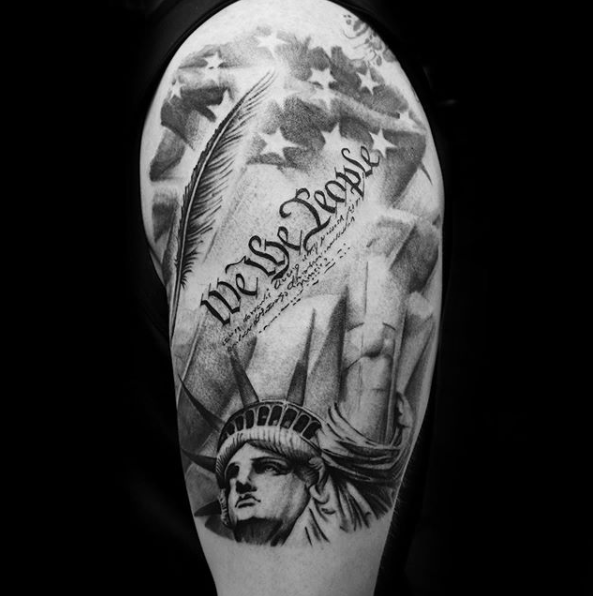 Featuring the Statue of Liberty, by Ven (@man_made_tattoos on Instagram).

It was a momentous event. But it never would have happened without the courage and initiative of the Founding Fathers. Before the amendment of the constitution, the United States of America, ironically, was nowhere near united. Because of the faulty legislation of the Articles of Confederation, the people were in constant revolt, and each state acted on their own accord, paying no mind to the union. Not only was there separation among the people, there was also separation among the states—something that the Articles of Confederation intended to put an end to. 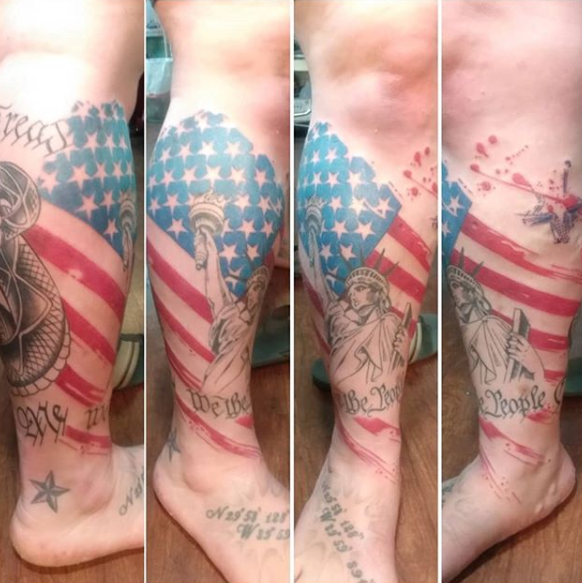 This all changed when the framers finally drafted the US Constitution. In the last moment before it was passed, Gouverneur Morris decided to write the Preamble to the US Constitution—and it was because of this split-second decision that the words “We the People” were given to all Americans. 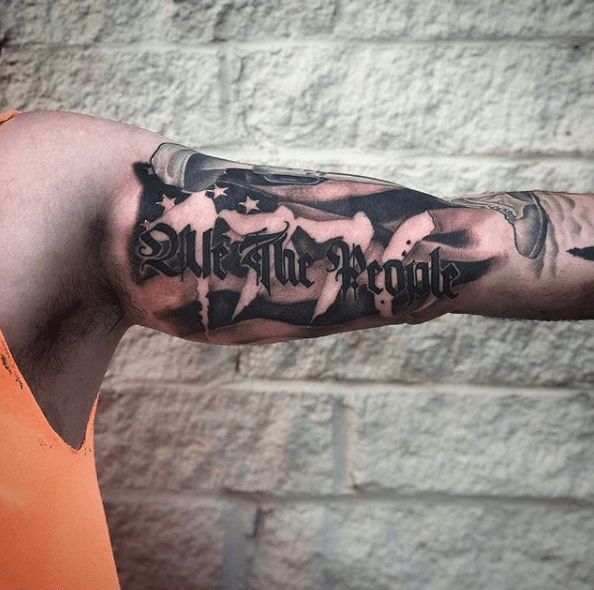 Featuring 1776, the year of the Declaration of Independence, on the inner bicep, by Joe Davila (@jdavilatattooer59 on Instagram).

In the Preamble to the United States Constitution, “We the People” are the first three words you’ll see, written with quill and ink. And today, it’s a strong statement that echoes how the United States of America was founded by the people for the people. 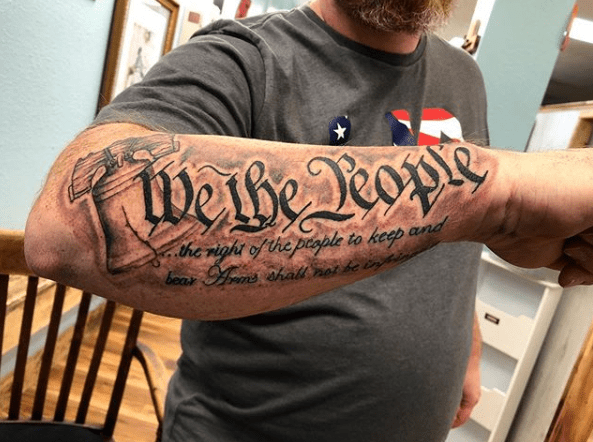 Featuring the liberty bell and the second part of the second amendment, by Brickhouse Tattoo Studio (@brickhouse_tattoos on Instagram).

In hindsight, it was probably an insignificant detail, especially since the preamble was merely an afterthought—never discussed nor voted on. In fact, the Preamble bore no legal meaning. It merely mirrored the vision and intentions of the Founding Fathers upon writing the Constitution. 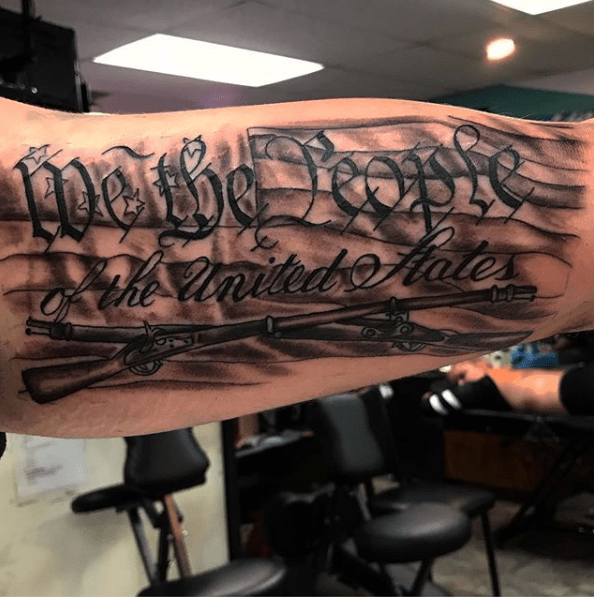 Good old black and grey ink featuring two muskets, the staple weapon of the Americans during the revolutionary war, by Chris (@thetattoostudiokilleen on Instagram).

But unbeknownst to Sir Morris, the first three words would become one of the most iconic expressions of patriotism known to the American people—and one of the most banging tattoo designs an American can have. 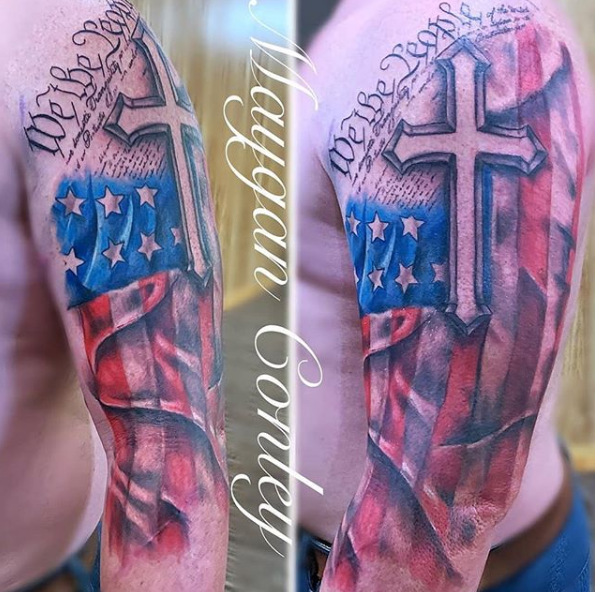 For god and country, by Maygan Conley (@tattertot_may on Instagram).

And while this story closed off with such a pleasant ending, it could have gone way worse. The circumstances back then were dismal, and it would never have happened if our brave forefathers had not taken initiative. The new US Constitution was the seed that made it possible for America to become the greatest country in the world. But the reason this tattoo design resonates so much is because these three words signified the resolution of hundreds of years of hardship and sorrow. 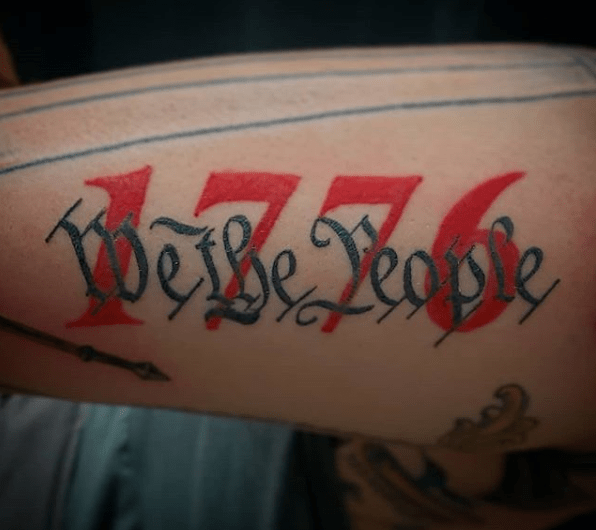 1776, the year of the Declaration of Independence, written in red, the color of the revolution, by Matthew Isaacs (@matt_tatt on Instagram).

This is why it’s important to also look at the hardships along the way. One of the most historic events that transpired on the way to making the new Constitution possible was Shays’ Rebellion. It was one of the main catalysts that forced the ruling class to review the existing constitution, the Articles of Confederation, which was the cause for so much of the unrest at that time. 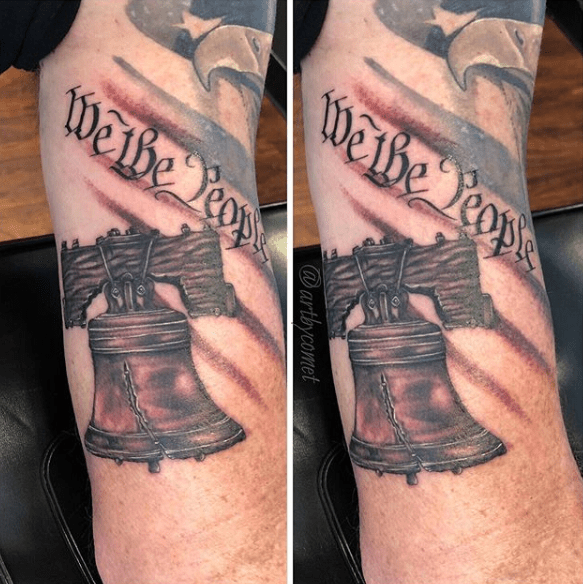 The iconic Liberty Bell in front of the American flag and a bald eagle, by Haylee (@artbycomet on Instagram).

Daniel Shays was a veteran, and one of the reasons that drove him to start the rebellion was coming back to Western Pennsylvania from the revolutionary war to return to his life of farming, only to be taken to court for debts unpaid while he was out fighting the war. 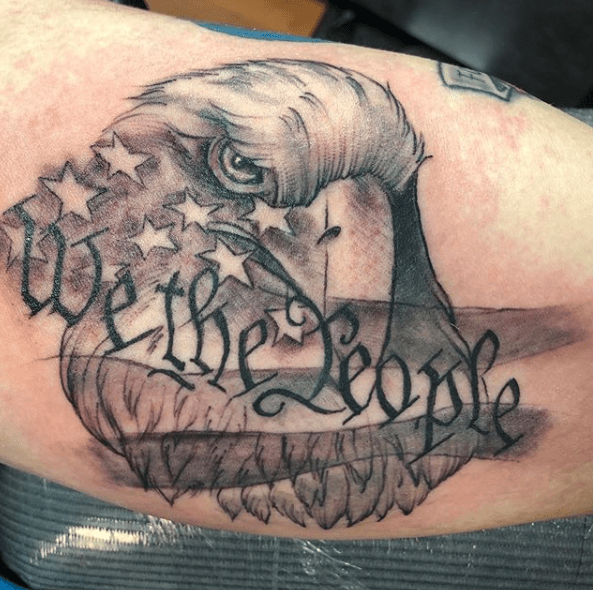 The stars and stripes blend beautifully with this bald eagle’s noble demeanor, by Gina Sherry (@studio69tattoo on Instagram).

But because he was not paid at all for his service, there was no reasonable way he could settle these debts. When he discovered that other veterans and farmers were in the same situation, they petitioned for debt relief. But because the legislature was so out of touch with the people, all proposals for debt relief were rejected. The worst part was—the law couldn’t enforce their rights. 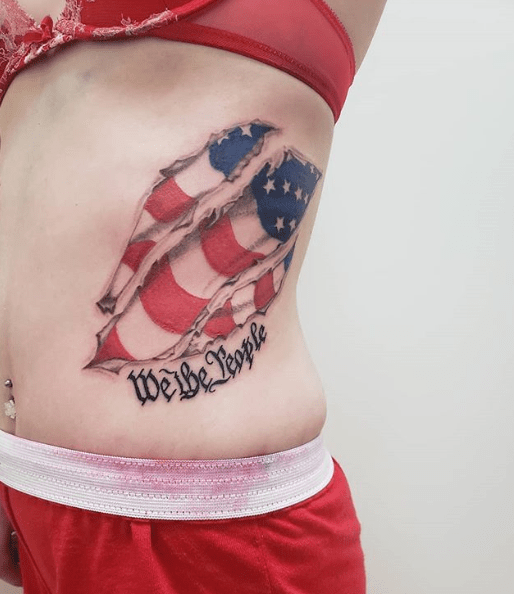 This woman is American inside and out! by Blackbird Tattoo Co. (@blackbirdtattooco on Instagram).

The Articles of Confederation was so badly written that, even though it intended to unite the thirteen American colonies, it probably gave them more reason to conduct their affairs separately. Each state maintained its own sovereignty—there was no unity. 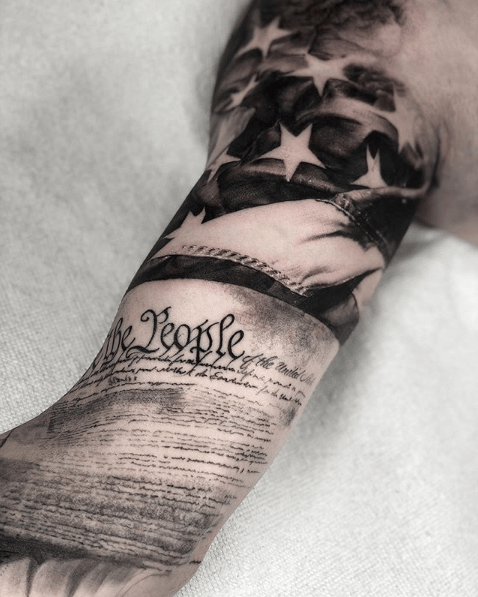 Check out how extremely detailed the fabric is on that American flag, by Angel Reynosa (@angel.reynosa on Instagram).

There was no monetary system and they couldn’t tax people effectively so there weren’t any funds to allocate for important expenses like military. Adding to this, there was no strong central government. There was a noticeable absence of a strong leader who could make important decisions. And because the government was so ineffective, the people had no choice but to rebel. 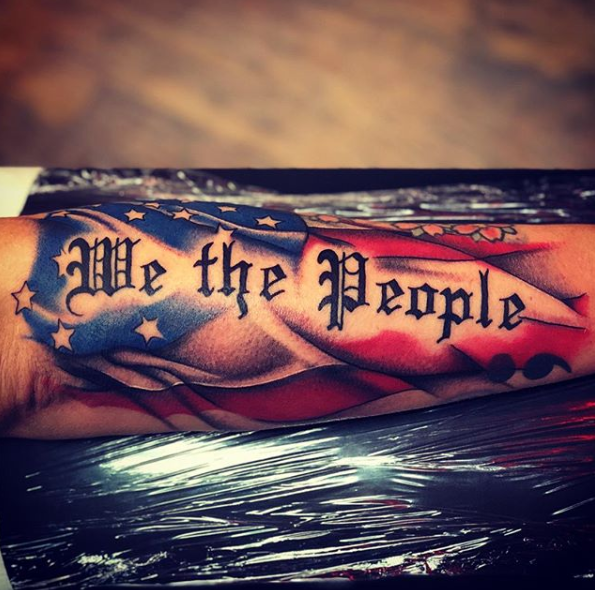 A different Old English font than usual, in bold red, white, and blue, by Lo Chavez (@loker15 on Instagram).

Shays’ Rebellion exposed to the American people that the Articles of Confederation would not be enough to keep people happy. They needed a stronger government that would protect the people’s rights and interests. 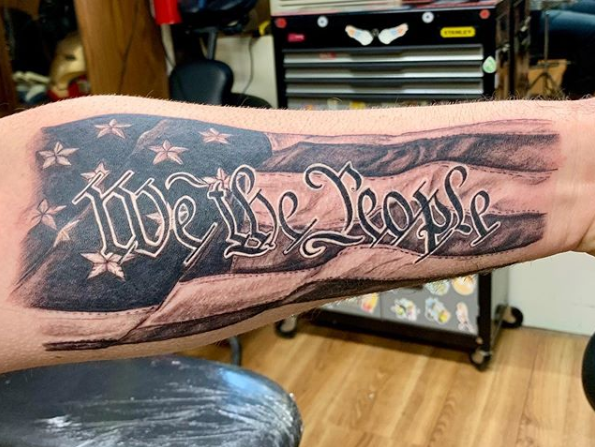 But in the end, Shay’s rebellion failed. The opposing government paid a private army to take down Shay’s rebellion so that their debts would still get paid. Daniel Shay was arrested then pardoned a few years later. 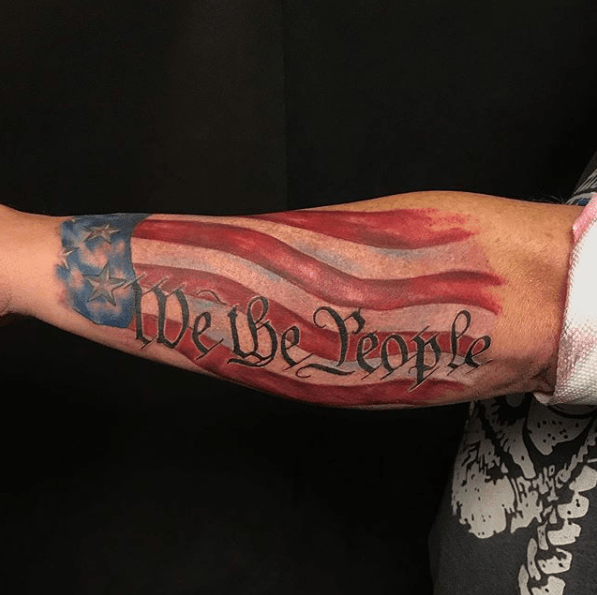 But the reason why Shay’s Rebellion matters so much, despite of its failed outcome, was because it allowed Americans to see the weaknesses of their existing government. It was a wake-up call. Not particularly for the commoners—but for the ruling class. 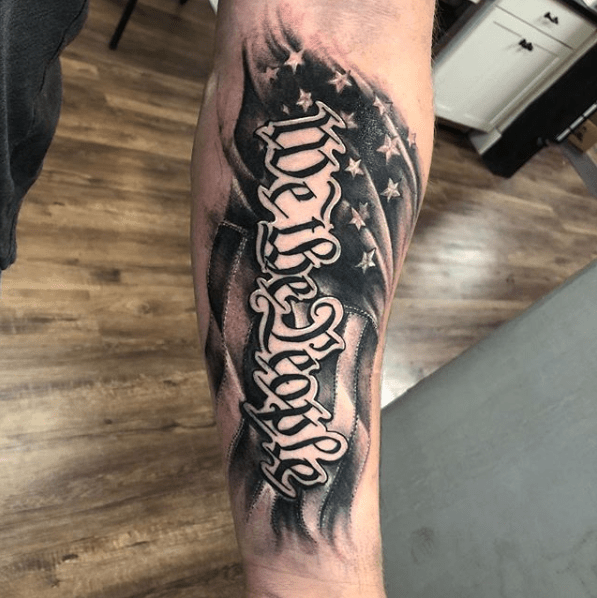 Forearm tattoo in black and grey, by Jenny Junkyard James (@pigmentgypsy on Instagram).

The answer they were looking for was federalism—a central government. And a strong leader at the head of that central government. By forming a stronger constitution, and thus a stronger union between the ruling class and the common people, they could prevent the country from falling into a perpetual state of anarchy. Eventually, on March 4, 1789, the new US Constitution would be ratified, effectively replacing the Articles of Confederation. 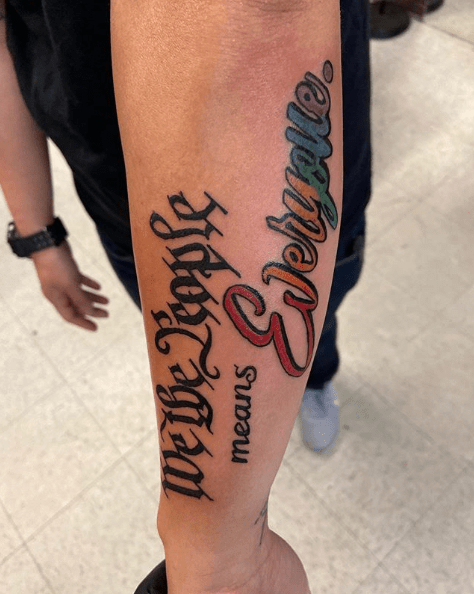 A thoughtful take on We the People advocating inclusivity for the land of the free, by Mario Romero (@r3hab_ink on Instagram).

This new Constitution was what truly unified the American government and the common people. Before the amendment, there was pure chaos and separation. But the people fought. And the people won. 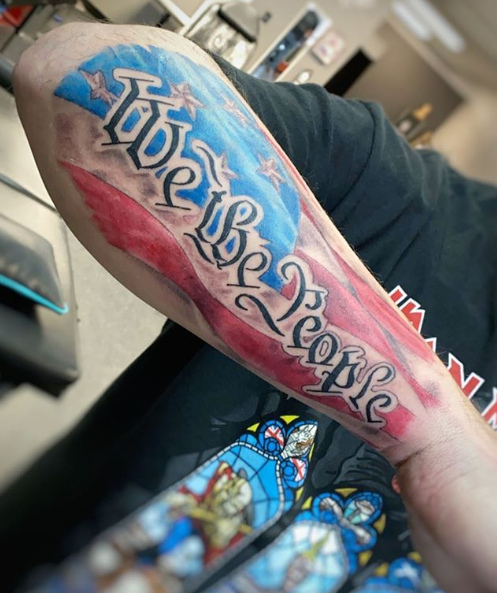 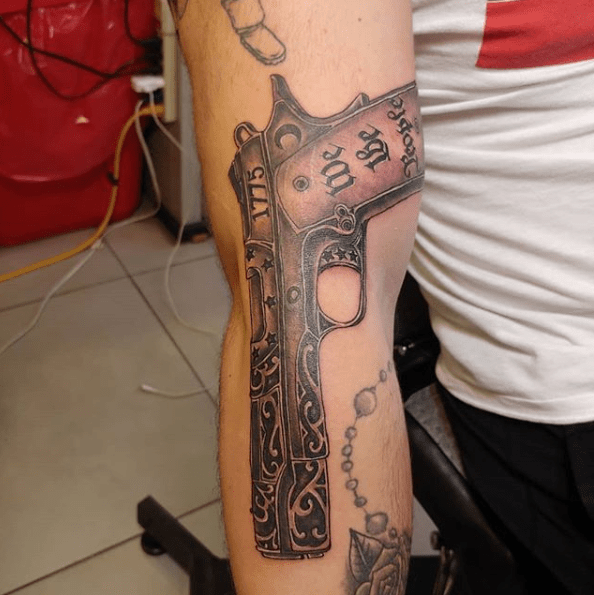 A handgun with the year 1775 etched on its slide, the year that the American revolutionary war began, by Good Time Fergus (@goodtimefergus on Instagram).

It’s no mystery why a lot of the patriotic designs are built around these three powerful words. These three words not only signalled the end of almost two centuries of hardship, but recognized that this new America was made possible by no other than the people.

Popular
Recent
Tattoo Aftercare – How To Take Care of a Tattoo 0 comments
Tattoo Apprenticeship – How to Become a Tattoo Artist 0 comments
Tattoo History: From Caveman to Modern Society 0 comments
Kuro Sumi Tattoo Ink Review 0 comments
40 Inspiring Tree of Life Tattoo Designs (+ Symbolism & History) May 23, 2020
25 Patriotic “We the People” Tattoo Design Ideas (And the History Behind Them) May 23, 2020
55 Amazing Forearm Tattoo Designs (for Men & Women) May 21, 2020
50 Most Powerful Phoenix Tattoo Designs of 2020 (+ Symbolism & Mythology) May 20, 2020
Earnings Disclaimer: When you buy certain products from some of the sites which we link to, Tattoo Like the Pros receives a commission.