This post contains affiliate links. If you click and buy we may make a commission, at no additional charge to you. Please see our disclaimer for more details.

You’re in the mountainside, exhausted but fulfilled. You rest with your peers after scaling the rocky territory. You’re almost at the peak.

Suddenly, as you absorb the scenery, sinking into a comfortable patch of grass—a harsh ray of light stuns you as you sip on your lukewarm Gatorade—you spill some in the process.

But common sense tells you that the sun doesn’t move—at least not that fast.

You squint, convincing yourself it’s nothing more than the high-altitude hallucinations you’ve been reading about.

It reveals its silhouette—a bird.

Slowly starting to make out an image, you notice its brilliant scarlet and gold plumage. It continues zooming through the sky—seemingly leaving a trail of livid light. It was like a living meteor.

In another glimmer of light, it vanishes into the distance.

Suddenly, you feel refreshed. You feel—Hopeful.

If you’re having trouble deciding on which tattoo you want to get, you can never go wrong with the Phoenix. Its appearance alone is enough reason for you to permanently etch it into your skin.

But, when I tell you about the rich history and symbolism surrounding it, that’s when it truly gets interesting. There’s a reason so many people are drawn to this creature.

And when you give a skilled tattoo artist the opportunity to work on a piece backed by thousands of years of culture, you’ll get some of the best pieces of art known to man.

In this article, I’ve compiled 50 of the best Phoenix tattoos I’ve seen on the internet, along with the symbolism and history that has molded the Phoenix into what we know of it today.

The Phoenix is a mythical creature that is ingrained in various cultures. Because of this, the legendary bird has been known to represent many ideas.

Here are a few of the most prominent symbolisms that the Phoenix carries.

In Chinese culture, the Phoenix is depicted as two birds—male (called Feng) and female (called Huang).

These two birds would later merge into the Fenghuang, an amalgamation of the parts of different birds—the head of a pheasant, body of a duck, tail of a peacock, legs of a crane, beak of a parrot, and wings of a swallow.

This exotic fusion of beautiful birds made the Fenghuang a unique take among the various portrayals of the Phoenix.

Further tying it to its Chinese roots, Feng and Huang are known to represent yin and yang—a concept in ancient Chinese philosophy pertaining to dualism, balance, and harmony. In the end, Feng and Huang were two sides of the same coin.

Of course, the Phoenix you might be more familiar with is known for its unique ability to burn itself into a pile of ash—and, from these ashes, it would rise reborn.

The Phoenix is a cyclic creature. It begins and ends and begins afresh.

And because the Phoenix is such a fitting symbol for resurrection and rebirth, some people decide to mark their skin with its proud image—often doing so because of their renewed perspective on life.

Some of these people come from dark pasts. To them, the Phoenix rising from the ashes represents the hardships they overcame in order to recreate themselves into their better versions.

Other traits that the Phoenix boasts are its legendary intelligence and speed.

In legends told, humans would partake in relentless pursuit after the fire bird, often coveting its various powers:

Of course, what the Phoenix does depends entirely on which book you read. Across the world, there are hundreds of vastly different representations of the mythical bird.

But, throughout its various portrayals, one piece of its identity seems to never change—its otherworldly power. And it’s because of this power that some people decide to tattoo the Phoenix on their skin.

You’ll quickly notice that most pieces are adorned with striking multicolor patterns and roaring flames. Its sharp eyes and giant talons are stark reminders of its power.

Come to think of it, I can’t think of a better canvas to display the smoldering intensity and sheer power of the Phoenix’s appearance—than one’s back.

With such fascinating, vivid lore surrounding the Phoenix, it goes without saying that it couldn’t have been possible without centuries of telling and retelling from generation to generation.

These various cultures have shaped the image of the Phoenix into the versions we know now. In fact, it can hardly be associated with a single culture since so many of them have had a hand in molding the story of the Phoenix.

Let’s take a closer look into its history. 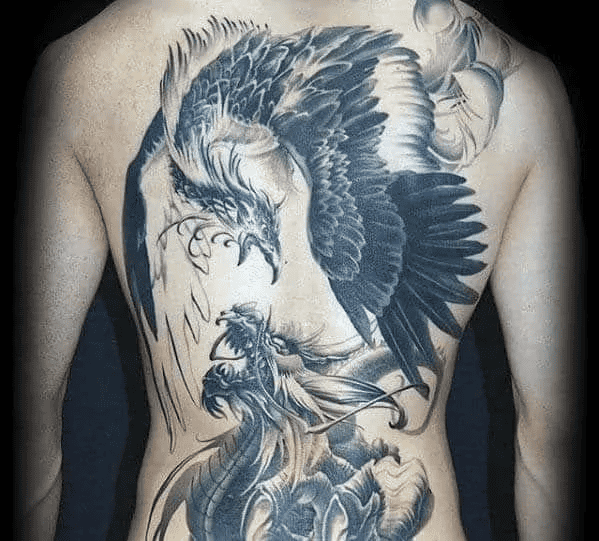 This might surprise you, but the Fenghuang and the Phoenix are different things.

Their similarities end at the surface—probably the only overlap between the two mythical birds is their red and gold plumage and their affinity to fire.

You see, unlike the Phoenix, Fenghuang doesn’t self-immolate or rise reborn from the ashes.

Remember what I said earlier about Feng and Huang merging to become Fenghuang? Well, Fenghuangs are gods of peace, prosperity, and good fortune.

You might be familiar with illustrations of a Phoenix-like figure seemingly in a quarrel with an East Asian dragon, like the one above.

These dragons are called Loong and, like the Fenghuang, are also gods of peace. They are often portrayed as either the Fenghuang’s mortal enemy—or their passionate lover.

Because the Fenghuang symbolizes the empress, motifs and patterns made after it were often seen on women’s clothing and hair pins.

Like the Fenghuang, the Japanese Phoenix (called Hou-ou) was used as a symbol of the empress.

It rarely blesses humans with its appearance—often appearing only in times of peace, marking the beginning of a new era, such as the birth of a righteous ruler.

While its presence is a symbol of peace, the Hou-ou’s disappearance, on the other hand, is a symbol of disharmony. It hides itself in times of turmoil.

The Hou-ou became quite a popular motif in the Nara period and was used on various items such as mirrors, chests, and textiles. It’s also a popular tattoo motif for Yakuza clan members, where it represents rebirth, triumph, and fire.

Fun fact: the Egyptians were the first to speak of what we know now as the Phoenix.

It’s true. Only, then, they called it Bennu.

Like what we know of the Phoenix, Bennu also had red and gold plumage and the ability to resurrect itself from the ashes, often described in scripture as a new sun rising after the old has died.

However, unlike the other portrayals of the Phoenix (which were illustrated to look more like pheasants or peacocks), Bennu was a heron.

Bennu was the sacred bird of Heliopolis, the city of the Sun. And you could recognize it from its long and slender neck and red and gold plumage, with two erect feathers adorning its head.

Funnily enough, despite the origins of the tale of Bennu coming from Egypt, legends instead tell of the mystical bird coming from Arabia

What’s interesting about Bennu is that it’s said to possess the secret to eternal life, which was given to it by Osiris, God of the Underworld. It symbolizes wealth, fertility, and longevity.

This brings us to the last portrayal of the Phoenix—and perhaps, technically the first?

You might be wondering why I say that when I obviously just told you that the Egyptians first thought of the bird of fire.

It’s because the Greeks were the first to refer to this multicultural firebird as “Phoenix”.

You see, in Greek, “Phoenix” means “red”, further reinforcing the bird’s ties with fire and the Sun. And, unlike Bennu, which is illustrated most often as a heron, the Phoenix more closely resembles eagles or peacocks.

At dawn, during the morning, the Phoenix lets out a melodious tune—as if singing. The melody is so beautiful that even the Sun god Apollo would stop his chariot—just to listen.

Unlike its other portrayals, the Phoenix is a solitary creature. Only one can exist at a time. It lives and dies alone, as only dying will bring forth another Phoenix into the world.

But when it does, and a new Phoenix rises from the ashes of its predecessor it’s an enchanting event. Exactly the reason why people are drawn to this bird.

Are you more comfortable showing off your Phoenix in simple but sleek black and grey?

In this section, I’ve compiled some of the best black and grey-style Phoenix tattoos I’ve ever seen.

The collection’s short and sweet but curated enough that you should be able to pick one or two that you’re sure to enjoy.

If, however, you’re more interested in a colored design for your Phoenix tattoo, skip over to the next section.

Here, check these out:

If you’re not too much of a fan of black and grey tattoos, I recommend getting your Phoenix colored. Colored Phoenix tattoos are usually dominated by red, orange, and yellow hues, with accents of blue and green.

Where each piece is located usually varies from the back, chest, and arms, where it can be proudly displayed. And some of the best pieces, as you’ll see in this list, are the massive, detailed back pieces where the glory of the Phoenix is truly done justice.

Though it’s true that a black and grey Phoenix, as shown above, can still be mind-numbingly awesome—there are just some tattoos that look best when colored.

I’m not saying that black and grey tattoos are inferior, but you’ll know what I mean when a friend unwittingly asks why you have a peacock on your back.

And don’t get me wrong; opting for just black and grey is alright! Some people actually prefer it that way. Flames, in my humble opinion, are meant to roar in fierce orange and red—but if your artist knows what they’re doing, what have you got to worry about?

Personally, I just think the Phoenix looks much better in color. Look at these next pieces and you’ll see what I mean.

If this is going to be your first tattoo, then I’m glad to have welcomed you to the community. It’s going to feel extremely liberating.

The rush you get after you first leave the tattoo shop is unlike anything else, and I hope you appreciate it as much as I did.

Lately, readers have been storming my inbox asking about how badly tattoos like these would hurt their wallets. So I prepared a short guide on tattoo prices for anyone who needs a bit more advice about the financial aspect of tattooing.

Now, when you mark your skin with the proud image of the Phoenix, you’ll become a vessel for everything it represents—the legends, history, and culture, all centuries in the making.

But when the time comes and you forget all that jazz—you’ll still have a pretty fucking awesome tattoo.

Jonathan Corby "Jonny" is a guy who is passionate about Tattooing and successfully running a Tattoo Studio in NY. Through my journey as a Tattoo Artist I have made unforgettable memories. This irrational poetry and sense of freedom of art on skin has given a blissfull experience to my life. Each Tattoo has a story behind it; Lets share one!

Tattoolikethepros.com is a participant in the Amazon Services LLC Associates Program, an affiliate advertising program designed to provide a means for sites to earn advertising fees by advertising and linking to Amazon.com.

Additionally, tattoolikethepros.com participates in various other affiliate programs, and we sometimes get a commission through purchases made through our links at no extra cost to you!